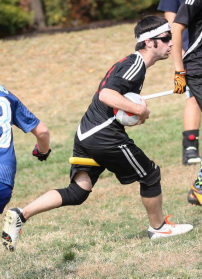 Alvin is an incredibly talented and dedicated athlete. Every time he steps onto the pitch, his speed and strength easily stand out among other players on the pitch. Alvin's favorite part of being a Badger is how the Badgers never give up. Even when they are down, they just keep "scratching" and "clawing" no matter what. His biggest Quidditch achievement was scoring the first points of the Honey Badgers thrilling double Overtime win against CMU at the Mid-Atlantic Regional Championship in November 2014.

Alvin was also named Captain late in the 2013-2014 season and continued through the 2014-2015 season. Through his leadership, the Badgers have seen an increase in competition and have been able to assist in developing and expanding Quidditch in the Philadelphia area through "Inter Philly" Tournaments. Alvin is a hard and dedicated worker and while he has stepped down as Captain, we look forward to seeing his ferocity on the pitch this season!
Photo Credit: Isabella Gong