Quidditch is an intense fully co-ed, competitive, full contact sport based off of J.K. Rowling's Harry Potter Universe. Muggle Quidditch involves two teams, seven players on each team and five different balls. It is an adapted from the already established Rugby, Dodgeball, Lacrosse and Tag. Teams fight to take control of the "Quaffle" which is a deflated volleyball, passing it amongst themselves to score between any one of the three hoops. When the "Golden Snitch" has been caught, typically an individual dressed in yellow with a tennis ball attached to their pants, the game is over and the team that caught it is awarded 30 points. 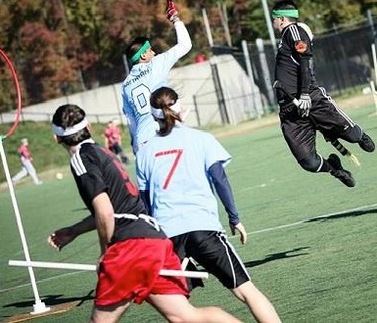 Quidditch uses five balls actively throughout the entire game.
The "Quaffle" is a slightly deflated volleyball. The Quaffle acts as the primary ball used to score points on the quidditch pitch. Chasers and the keeper throw the quaffle between their teammates and shoot it through any one of the three hoops present. Goals can be scored from the front or back of the hoops. If they score this way, their team will be awarded 10 points.

"Bludgers" are used by Beaters and are dodgeballs. There are three dodgeballs on the pitch at any given time. Beaters use the dodgeballs to throw at players. If a player is hit with a bludger, they are considered to be "beat" in which they have to get off their broom and will be temporarily out of the game. In order for them to be back in, they must tag their team's hoops before returning to the play.

The "Golden Snitch" is a tennis ball tail attached to the pants of a player - called the "Snitch Runner" - not associated with either team. Seekers compete against one another to grab the Snitch (tail) when the Snitch Runner arrives on the pitch after approximately eighteen minutes of play. When the Snitch is caught, the game is over and the team that caught it is awarded 30 points.
Photography by Isabella Gong

Chasers
Chasers use the quaffle to score points by passing, driving to hoops and taking shots. They are also responsible for stopping the other team's chasers and keeper from scoring. Good chasers have great field awareness, cut to open lanes on the pitch, have good aim, are not afraid of contact, and are willing to give/take a tackle. Chasers wear white headbands.
**Try this if you: play basketball; are a receiver, running back, corner back or safety in football

Keepers
Keepers are the defenders of the hoops, and are allowed responsibilities not held by chasers. They can also approach on offense and score points. Good keepers communicate well with their team, are not afraid of using force to keep players from scoring, are willing to give/take a tackle, see the field well, and can block shots on all three hoops. Keepers wear green headbands.
**Try this if you: play quarter back, are a soccer goalie, have great field awareness

Beaters
Beaters are primarily used on defense and are responsible for beating the other team by throwing and hitting them with bludgers (dodgeballs). They attempt to maintain bludger control (possessing 2 of the 3 bludgers) throughout the game, as this is advantageous to the team. Good beaters play strategically, have a good throwing arm and aim well, are not afraid of getting a bludger to the face, and have a good idea of how the play is unfolding. Beaters wear black headbands.
**Try this if you: play baseball, softball, or dodgeball; like throwing things at people; like to play strategically

Seekers
Seekers are responsible for catching the Snitch. This earns the team 30 points and ends the game. Seekers need to be willing to do whatever it takes to catch the snitch, which will include a lot of running, wrestling, diving, dodging and jumping. Snitches tend to be physical and fast, so Seekers need to be up to that task. Seekers wear yellow headbands.
**Try this if you: wrestle, run cross country or track, play flag football, like to play one on one

Or try all the positions and see what you like the most! Many Quidditch players play multiple positions, so don't be afraid to try more than one!